Last weekend was a pretty big deal...  At the Portland Expo Center they had a cat show and I was in it!  Look, I got my name in a book saying I was there and everything!  Although, they got part of it wrong...  I am officially a "red mackerel tabby and white."  That's the fancy name for a ginger tabby tux. 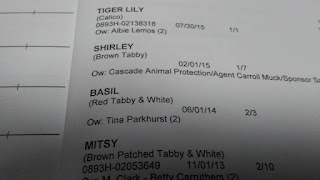 Mum went there the day before and set up all the stuff that she had made for me to have a beautiful space and be comfortable.  I think she did a good job! 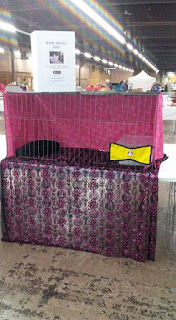 I got a very thorough bath on Friday night and we all had to get up really early on Saturday to be there in time.  You wouldn't believe how many other kitties were there - over 200 in total!  There were over 30 in the Household Pets CATegory that I was in - and I had to compete against every one of them.  *cue theme music from the movie Rocky*

The way that cat shows work is that you get judged at least once by EVERY JUDGE PERSON at the show.  Let me tell you, that's a lot of judge.  Most kitties don't know quite what to do the first time in a show so sometimes they get really scared, hiss and scratch at the judge person, run off the table, just freeze up, or worse!  It's kind of unusual for a new cat to do well at shows. Mum took me to my first judge or "ring" and I was ready.  Mum was more nervous than I was.  Guess what? 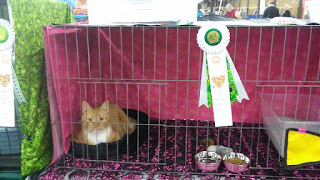 The judge man human picked me as his tenth best cat in the show among all of the Household Pet kitties!  It was good but I allowed him a little room for improvement since we'd never met before.

In between going to SIX judging rings and all of the visiting humans, I got pet by over ONE HUNDRED people in the whole day!  Mum and I talked to all of them about what being a therapy kitty is like and some want to become one possibly.  Lots of people made me purr and if they did, they got a "I got purred!" sticker. 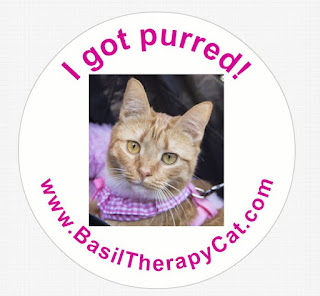 By the end of the day, four out of the six judge humans picked me to be in the top ten best cats in the show (in the Household Pet CATegory anyway) and a few of them couldn't believe it was my first show because I did so well and was so comfortable with everything.  The pink ribbon was my best for the day - SEVENTH PLACE!  I liked that judge a lot and had fun with her. 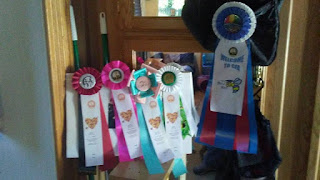 By the end of the day, I was one tired girl but I made SO MANY new friends.  A person from someplace called the CFA (Cat Fanciers Association mom says) even asked me to come represent them at a really big animal show called the Portland Pet Expo on October 15 & 16.  Mum said that we would be only if I could represent therapy kitties too!  They said "Yes." 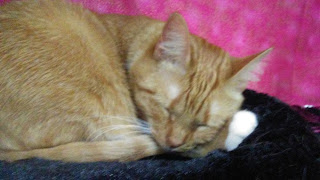 All in all, it certainly was an adventure for this therapy cat.  If you'd like to see what it was like to be judged at the show, visit my Facebook page and watch the videos.
at 3:07:00 PM

Please feel free to comment here BUT NO SPAM!! ALL SPAM WILL BE TAGGED AND REPORTED!

THAT MEANS YOU, GHAZI!!